Defiance, Ohio, a sleepy little town, about 55 miles south of Toledo, had a series of unusual encounters in 1972 that will become whispered legend in the years after. Defiance is your average, small, Midwestern American town. Most of the people who live there make their living by working at one of the handful of factories around the area. Defiance is best known for its Fort Defiance, which has a colorful historical significance . So what happened in Defiance all those years ago? Possibly the oddest couple of Dogman encounters ever reported.
On July 25th, 1972, when two employees a local freight train company were working the graveyard shift, inspecting railcar braking systems. Ted Davis, one of the witnesses, during an interview with the Toledo Blade said, “I saw these two hairy feet. Then I looked up and he was standing there with a big stick over his shoulder. When I started to say something, he took off for the woods.” The creature was also described as having, “huge, hairy feet, fangs, and it ran side-to-side like a caveman in the movies.”
About a week after the first encounter, Davis claims to have seen the creature, at the same place as the first encounter, the rail yard. He said it looked at him from the edge of the woods, and the turned and left. That same night, a grocer reported an attack from a hairy, animal-headed creature wielding a two-by-four.
In a small town, nothing stays quiet for long. About a week after the initial events, the local newspaper caught wind of the unusual story. The headlines wrote “Horror Movie Now Playing on Fifth St.” and opened with the famous poem from The Wolf Man:
“Even a man who is pure of heart,
And says his prayers by night,
May become a wolf when the wolf bane blooms,
And the moon is clear and bright.”
The Crescent News, the local newspaper, and the Toledo Blade, ran a total of four articles about the incident. The longest of the articles focused on the local police force’s investigation into the incident. Headed by Donald Breckler, the police chief at the time, the police searched extensively for the “werewolf”. Although the general public thought that it to be a bored teenager’s prank, Chief Breckler considered the club-wielding, animal-faced assailant was a threat to the community. Eventually, after days of looking and no results, the search soon ended.
It is worth noting that Defiance, Ohio is no stranger to unusual phenomena. Within the past fifty years Defiance has seen hundreds of Unidentified Flying Objects, a Dracula lookalike running amuck, and numerous other tales of the weird.
Later this year, Ken Gerhard will be running a symposium about the Dogman and it is located in the town of Defiance. You can find more info here.

Here is one of the articles about the Defiance Werewolf 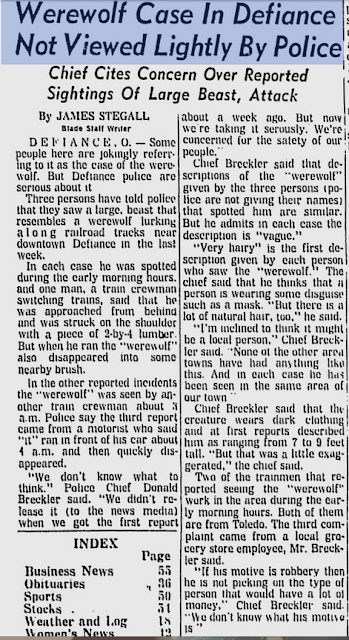 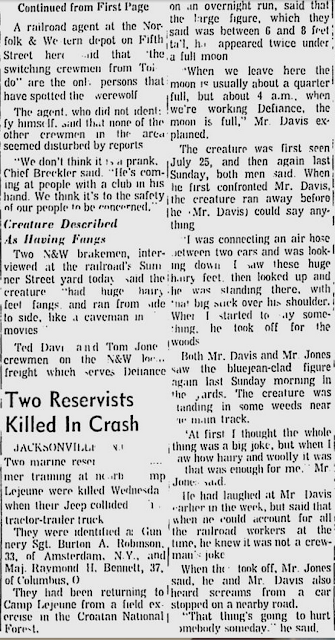 Listen to my radio show!

Colin Schneider has been involved in cryptozoology and ufology since he was 13 after he visited the International Cryptozoology Museum in Portland, Maine. A frequent attendee of conferences about the unexplained, Colin lectures at numerous events around Ohio and Pennsylvania. He also is a regional representative for the Centre for Fortean Zoology. And finally, he hosts the live Crypto-Kid Radio Show on the Paranormal King Radio Network every Monday at 8 pm. He can be contacted via email at paranormal10142@gmail.com